How to find the production version of Empower? 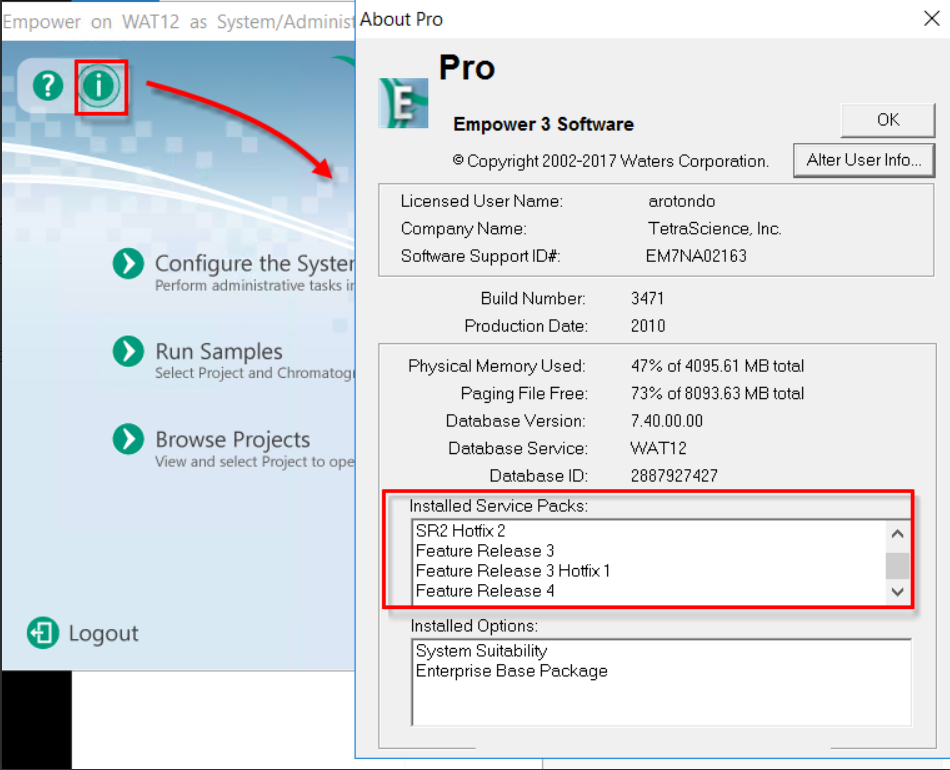 Which versions of Windows are supported?

The TetraScience Empower Agent should be installed on the same computer as the Empower 3 Client.

The TetraScience Empower Agent is compatible with Empower 3 Client Service Release 2 or higher. The latest version is Feature Release 5.

Since Microsoft has stopped supporting some of the operating systems above like Windows 7. TetraScience suggests installing the Empower Agent on the newest version of the Windows operating system to avoid possible unexpected behavior.

Is TetraScience Empower Agent a 32bit or a native 64bit application?

The Windows service, which scans and extracts the Injection from Empower through ToolKit, is built as a 32-bit application because the Empower ToolKit is 32-bit. The other two components are 64-bit applications.

Can you specify minimum/typical/ideal hardware configurations required to run the agent?

The TetraScience Empower Agent extracts the Injections from Empower and uploads them to TetraScience Data Platform.

Taking an example, for 90K injections, roughly 360 GB space is required. We recommend you allocate a separate drive for those injection files such that the Empower client application is not affected.

CPU requirements should match with the Empower client. We suggested 1X Intel E5-2620 V3 (4 cores @ 1.8 GHz). The recommended memory requirement is 16G and 8G at a minimum. Recommended network bandwidth is 1000 Mbps and 100 Mbps at a minimum.

Which version of EMPOWER is supported by the Tool?

Does the agent need any change to be implemented at the Empower Acquisition Server?

No. The Agent performs standard operations through Empower Toolkit. No change is required for the Empower Acquisition Server.

Must Empower Client to be installed on the same machine?

Yes, the Agent extracts Injection through Empower ToolKit, which is part of Empower Client installation. TetraScience Empower Agent will use Empower Client’s component to make the connection.

Must the agent software package be installed on each server in a CITRIX Farm if EMPOWER is running in CITRIX?

The TetraScience Agent only needs to be installed on one computer that runs the Empower Client. You can install multiple agents to spread the workload, for example, each agent targets certain projects.

Can a dedicated machine be used where no users to log in?

How is project data extracted from Waters Empower?

How does the Agent identify which injections have to be exported?

However, there are two mechanisms to avoid scanning all the projects

If the export is executed the very first time: Are there any measures in place preventing the system from being impacted by high load due to a large amount of to be exported data?

Yes, the Empower Agent will scan all of the projects with which the Empower DB Account running the Agent has the permission to access. Users can configure the Agent to only scan certain projects.
To minimize the impact on the Empower system due to the extra load, several measures can be adopted

Can the TetraScience Empower Agent detect injections that are updated?

Yes, the Empower Agent can detect changes of result processing date/time, and trigger re-acquisition if the injection has been updated. Following changes to injections are considered as injection updates:

The Tetra Empower Agent generates a JSON file containing the information of Empower User, User Types, User Group, and the list of the Projects associated with the User Group.

The Agent regenerates the JSON file when the following conditions happen:

The regenerated JSON file will be uploaded to Tetra Data Platform as a new version file.

How Does the Agent Generate the Injections with the Result Sign Off Options?

The Injection generation and the content included is based on the Result Sign Off option selected by the user. The option is selected based on the individual project.

Can the export be directed to already existing “in-house” data lakes?

Yes, TetraScience can leverage its APIs or a configured Data Pipeline to push data to the client’s “in-house” data lakes.

The destination can be both cloud or on-premise databases.

How long it would take for a project to be available in TetraScience Data Platform once they are in the Empower server?

It depends on two things.

How to make TetraScience Empower Agent scale up?

Selecting different Projects for each Agent, this way the entire processes are running in parallel. It will largely increase the overall throughput.

What happens when the same project is renamed/moved?

What happens when the project is created/added?

If a new project is added or imported to the Empower instance, that project will be shown in the Projection selection tab. The System Administrator selects the project manually and saves the change to have the Agent output the RAW files.

What happens when the project is removed/deleted?

If a project is deleted or moved from the Empower instance, the extracted injection data in Data Platform still remains.

How big are the JSON files compared to the original Empower projects?

As of Q3 2018, for a project that is ~13GB large, the combined size of the JSON representation is ~24GB. TetraScience is actively working on leveraging more advanced technology to reduce the size of the extracted data.

Is the agent configurable to export only injections from pre-defined projects/user groups?

Is something like a management console existing that will enable easy management of the entire solution.

Yes, management exists in two places corresponding to specific functionality. The Empower Agent has its own Management Console for configuration settings, project selection, backup/export schedule, status and setup configuration functions. The DataHub and integration can be managed from the web UI of the Tetra Data Platform.

Is the exported data a true copy?

TetraScience Empower Agent will extract data from Empower package the data on injection level and convert that into JSON per injection. This JSON file contains all the important data that customers care about, such as peak table, method, injection, result and etc. It enables visualization, search, customer application, and ELN integration.

TetraScience Empower Agent will also have the capability to export Empower projects in Empower’s native format and this is a native or “true copy” of the Empower Project file. TetraScience can provide checksum-based verification of file integrity on export/import from the Data Platform.

Is there evidence showing that the agent software is structurally validated by the vendor?

TetraScience has a quality procedure focused on Empower integration that compares data generated from the Agent with data stored in the Empower.

What will be the effort to manage the solution in terms of error handling/monitoring etc.?

TetraScience will manage, support, and upgrade the Data Platform as it is deployed in its dedicated AWS account owned by the customer. TetraScience requires the customer to provide assistance in troubleshooting issues that are related to customer business logic.

There are 2 places errors that may occur or monitoring will take place.

Updated about 1 year ago