Once data has been processed, the data is stored in a data cube, which is a multi-dimensional array of complex values. Having a cursory understanding of data cubes is important as you review the data because it will help you better understand SQL query results.

Cube data is grouped into different dimensions, indexed, and have precomputed queries frequently performed. Because of this, data cubes speed query processing.

There are two dimensions groupings:

Let's take a look at an example to better understand these concepts.

RAW data from a spectrophotometer that contains the following variables. Which are measures and dimensions?

A few other examples appear in the table below.

Mapping the Cube to Table Structure

Note that data cubes are often visualized as a "rubik's cube-like structure" but are typically stored in SQL tables. Measures and dimensions are mapped to table rows, columns, and values. To better understand this, let’s take a look at the following figure. 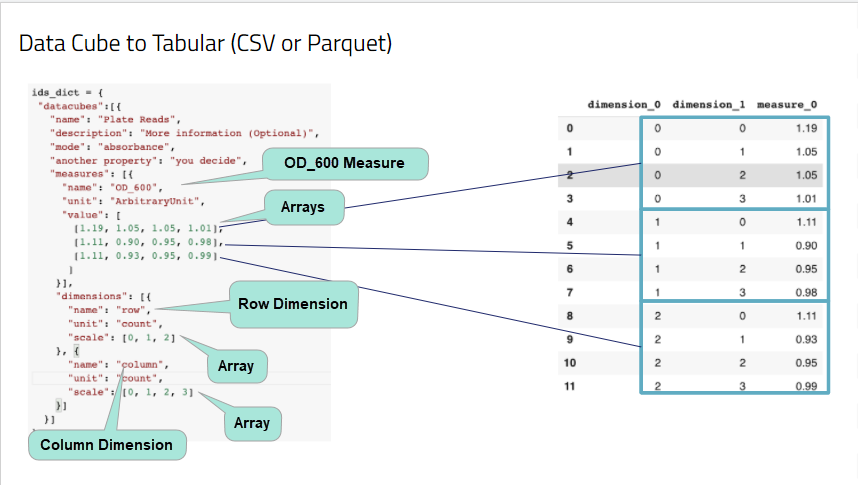 In the figure, there are two dimensions and one measure. Their names are “row”, “column” and “OD_600”.

Each dimension has an array. An array is simply an ordered list. In this example, the measure has three arrays. Each array contains elements (values).

Values in the dimension and measure arrays are collated based on the order in which the element is listed in the array. For example in the second measure array [1.11, 0.90, 0.95, and 0.98] the elements are in these positions:

The position of elements in an array are important because values in each row of the table collated based on the position of the elements across different arrays.

Note that if the measure contains several different arrays, the dimension arrays repeat.